The architecture of the Indian rock-cut temples, particularly in sculpture, had an influence on Southeast Asia and was widely adopted into the Indianised architecture of Cambodian (Khmer), Annamese and Javanese temples (of the Greater India). [1][2] Evolved from Indian influences, Khmer architecture became clearly distinct from that of the Indian sub-continent as it developed its own special characteristics, some of which were created independently and others of which were incorporated from neighboring cultural traditions, resulting in a new artistic style in Asian architecture unique to the Angkorian tradition.[3] The development of Khmer architecture as a distinct style is particularly evident in artistic depictions of divine and royal figures with facial features representative of the local Khmer population, including rounder faces, broader brows, and other physical characteristics.[4] In any study of Angkorian architecture, the emphasis is necessarily on religious architecture, since all the remaining Angkorian buildings are religious in nature. During the period of Angkor, only temples and other religious buildings were constructed of stone.

Non-religious buildings such as dwellings were constructed of perishable materials such as wood, and so have not survived. The religious architecture of Angkor has characteristic structures, elements, and motifs, which are identified in the glossary below. Since a number of different architectural styles succeeded one another during the Angkorean period, not all of these features were equally in evidence throughout the period. Indeed, scholars have referred to the presence or absence of such features as one source of evidence for dating the remains.

Many temples had been built before Cambodia became a powerful Kingdom of Khmer Empire which dominated most of the Indochina region. At that time, Cambodia was known as Chenla kingdom, the predecessor state of the Khmer empire. There are three pre-Angkorean architectural styles:[5] 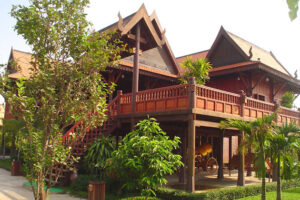 Scholars have worked to develop a periodization of Angkorean architectural styles. The following periods and styles may be distinguished. Each is named for a particular temple regarded as paradigmatic for the style.[6]

Angkorian builders used brick, sandstone, laterite and wood as their materials. The ruins that remain are of brick, sandstone and laterite, the wood elements having been lost to decay and other destructive processes. 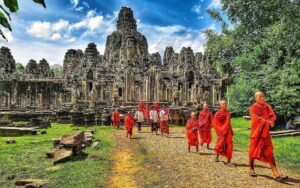 The earliest Angkorian temples were made mainly of brick. Good examples are the temple towers of Preah Ko, Lolei and Bakong at Hariharalaya. Decorations were usually carved into a stucco applied to the brick, rather than into the brick itself.[7] This was because bricks were a softer material, and did not lend themselves to sculpting, as opposed to stones of different kinds such as the Sandstones or the Granites. However, the tenets of the Sacred Architecture as enunciated in the Vedas and the Shastras, require no adhesives to be used while building blocks are assembled one over the other to create the Temples, as such bricks have been used only in relatively smaller temples such as Lolei and The Preah Ko. Besides, strength of bricks is much lesser as compared to the stones (mentioned here-in) and the former degrade with age.

Angkor’s neighbor state of Champa was also the home to numerous brick temples that are similar in style to those of Angkor. The most extensive ruins are at Mỹ Sơn in Vietnam. A Cham story tells of the time that the two countries settled an armed conflict by means of a tower-building contest proposed by the Cham King Po Klaung Garai. While the Khmer built a standard brick tower, Po Klaung Garai directed his people to build an impressive replica of paper and wood. In the end, the Cham replica was more impressive than the real brick tower of the Khmer, and the Cham won the contest.[8]

The only stone used by Angkorian builders was sandstone, obtained from the Kulen mountains. Since its obtainment was considerably more expensive than that of brick, sandstone only gradually came into use, and at first was used for particular elements such as door frames. The 10th-century temple of Ta Keo is the first Angkorian temple to be constructed more or less entirely from Sandstone.

Angkorian builders used laterite, a clay that is soft when taken from the ground but that hardens when exposed to the sun, for foundations and other hidden parts of buildings. Because the surface of laterite is uneven, it was not suitable for decorative carvings, unless first dressed with stucco. Laterite was more commonly used in the Khmer provinces than at Angkor itself.[10] Because the water table in this entire region is well high, Laterite has been used in the underlying layers of Angkor Wat and other temples (especially the larger ones), because it can absorb water and help towards better stability of the Temple.