The Bolaven Plateau is an elevated region in southern Laos. Most of the plateau is located within Champasak Province of Laos, though the edges of the plateau are also located in Salavan, Sekong and Attapeu Provinces. It is located between the Annamite Mountain Range, along which runs Laos’ eastern border with Vietnam, and the Mekong River to the west, at about 15°N 106°E. The plateau’s elevation ranges approximately from 1,000 to 1,350 metres (3,280 to 4,430 ft) above sea level. The plateau is crossed by several rivers and has many scenic waterfalls. The name Bolaven makes reference to the Laven ethnic group which has historically dominated the region. However, domestic migrations by the Lao ethnic group (which comprises approximately 50 to 60 percent of the population of Laos) has resulted in widespread interethnic marriage, thus modifying the ethnic composition of the region. 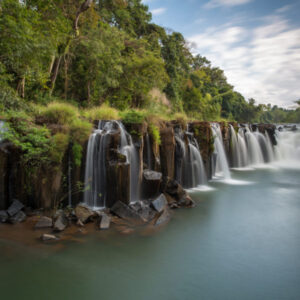 Tourism has taken a hold in the Bolaven Plateau because of the unique aspects of the region that have triggered great intrigue. The most popular places visited by tourists are the waterfalls in the region, the villages of the ethnic minorities, and other geopolitical areas of interest.

The Bolaven Province has a number of waterfalls. The Tad Lo Waterfalls that are approximately 58 miles from northeast Pakse are a common destination. The “lush vegetation” that surrounds the waterfall makes it a desired destination though the fall itself “drops only a few meters”. In addition, one can go “beyond Paksong on the way to Pakse another spectacular waterfall, Taat Fang (also known as Dong Hua Sao), tumbles 120 metres, making it the tallest waterfall in Laos. Well-marked trails lead the physically fit 6 kilometres to the base of the falls”:.

Tourist attractions also include the villages of ethnic minorities who have grown accustomed to sharing their culture with visitors to the region. Travel guides inform visitors of nearby villages that can be visited: “Alak, Katu and Suay villages can be found within a few kilometres of the resort”. Tourists are also informed of the markets where they can go and observe the cultures of ethnic minorities and purchase items unique to each culture.

The Bolaven Plateau is filled with cultural and geographical areas of interest. Whether it is a boat trip to one of the waterfalls that occupy the region, a tour of the area’s coffee plantations, an elephant day trek, or visiting one of the villages of the ethnic minorities, a journey to the Plateau has many opportunities for tourists.