Bun Thang has long since become a typical dish of the epitome of Vietnamese cuisine in general and Hanoi in particular. These chicken broth vermicelli bowls are indeed a perfect combination of colour, flavour and taste. Known as the “five-coloured flower”, this Bun Thang will attract foodies and tourists at first sight.

For many generations, Hanoi cuisine has been marked by quintessential processing and consumption. Like Pho, the “national dish” is present all over the country, but only the Pho in Hanoi is considered the best.

Speaking of Hanoi cuisine, it will be a mistake if we don’t talk about Bun Thang. 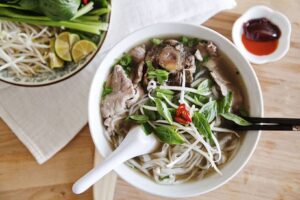 Previously, Hanoi people could only savour this dish on special occasions such as the Tet Festival. In the past, the women of Ha Thanh, (Hanoi’s old name), skilfully took advantage of the leftover foods of the Lunar New Year to produce a “new” dish that was both delicious and economical. This explains why we find in this dish the most common ingredients of Tet dishes in the North: chicken, Vietnamese pork bologna, shrimps, marinated dried turnips, eggs… Having become popular, this dish has evolved over time by adapting certain original ingredients and is enjoyed throughout the year.

This noodle soup is indeed delicious in flavour, attractive in appearance. In the middle of the bowl is a circle surrounded by thinly sliced omelette, chicken, Vietnamese pork bologna with brown mushrooms and a little shrimp. At the top is the onion layer, evenly distributed and cut into slices.

A delicacy from the smallest thing 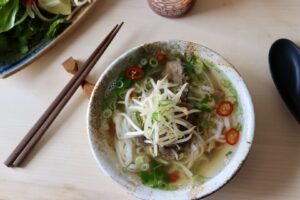 The ingredients for a Bun Thang Hanoi are very simple, anyone can easily find in the local market. But making a delicious bowl of vermicelli isn’t easy. Therefore, Bun Thang is considered the most sophisticated dish of Hanoi peoples.

The cook must be very picky and careful at every step: the selection of ingredients, the preliminary processing and the presentation. To make a bowl of chicken broth vermicelli, you need about 20 kinds of ingredients. So the Hanoi noodle bowl is a combination of subtle little things to give the perfect taste.

The broth is an important ingredient in determining the deliciousness of Bun Thang. The cook should skim the pot during cooking to prevent the water from becoming cloudy. The broth should be clear but sweet.

The delicacy of the Hanoi people is to use the available ingredients, without resorting to a sour taste, but to “drive out” the disgust of the dishes on Tet holiday.

Bun Thang Hanoi is appealing with the resonance of colours, flavours and even sounds that are pleasant to enjoy. The radish is crisp and sounds perfect with the sweetness of Vietnamese mortadella. To taste a bowl of bun like this is to appreciate a work of art full of colour and taste. It is also how diners receive the sincerity of skilful and meticulous housewives.