Chic, stylish, and sophisticated – we haven’t even said the word “Paris”, but you’re already thinking about it, don’t you?

Paris is famous for its beauty, astounding artworks, and architecture, with fantastic statues and sculptures alongside Art Nouveau and the Eiffel Tower.

This city is by far one of the most beautiful cities in Europe for several reasons. In the shape of the Louvre, the city boasts the largest art museum in the whole world.

Laying on the banks of the Seine, France’s cosmopolitan capital city is just as well known for its exquisite cuisine as its high-end fashion outlets. With so many treasures for you to find out, remember to savor Paris slowly – just like a fine French wine.

citizens and visitors. There’s just something about the magical feeling of Paris that you can’t really find anywhere else.

Want to explore more of French history, take a day trip out to the Palace of Versailles and live like a King and Queen for a day.

History is at the heart of Vienna – literally and figuratively in central Europe. The narrow streets with antiquated buildings provide an authentic atmosphere that you almost expect Wolfgang Amadeus Mozart or Sigmund Freud to greet you with “Guten tag” at the local cafeteria.

If it’s a culture you seek, you’ll surely find it in Vienna. From the Schönbrunn Palace to the Hofburg Palace to the perfectly manicured gardens, this city is the definition of charm.

But there’s more to this city than just music and monarchs. Vienna is also a great place to visit independent bookstores, and there are also a surprising number of attractions for young ones, including amusement parks and a top-notch zoo.

And although many Viennese retire early in the night, that doesn’t mean you have to – there are many bars and wine taverns for adventurists.

Vienna is the perfect city for a family getaway. This Austrian capital is filled with activities with things to do with kids in Vienna. In fact, Vienna is one of the most kid-friendly cities in Europe.

We traveled to Vienna with a baby and can confidently tell you that Vienna with kids is a blast. We took our 8-month old on our European trip and we were so impressed with the family-friendly public transport and activities.

The best way to see all these sites on a budget is through the Vienna city pass. We also recommend the Vienna City Card, which helps pay for all your public transport around Vienna and gives great discounts.

One of our favorite things to do with a baby in Vienna was the Schonbrunn Palace with its sprawling park and zoo. A lot of places to run around, perfect for the entire family!

Italy’s capital, Rome, is one of the most popular tourist destinations in the world. This is because there is so much to see and do in Rome boasting some of the most famous attractions in the entire world.

There are several ancient ruins and Roman monuments, including the Colosseum, which are a must-see for history lovers. In addition, Rome is home to some of the most famous landmarks in the world, such as the Pantheon and St. Peter’s Basilica.

This beautiful city comes alive no matter where you are as it’s hard to believe it’s real. The city center is like a walking museum every corner you look at.

Rome is also well-known for its food. The Italian cuisine is some of the best in the world, and Rome is home to many famous Italian restaurants.

Finally, Rome is a very romantic city and is perfect for a couples getaway.

Prague has been the capital city of the Bohemia for more than 11. centuries. It has always been the political, economical and cultural centre of our lands.

It was originally founded as a merchants town because it was lying on an intersection of two important trade routes. There is a river Vltava floating through Prague and separating the town into two parts, the right bank and the left bank. In 14th. century it was the biggest town in Europe as it became the centre of Holy Roman Empire.

Since 16th. century Prague has not been seriously damaged not even during WWII. and this is a reason why it is so well preserved with hundreds of beautiful sights.

Prague has 16 districts but the city center consists of four historical parts. All the important sights in a historical centre are within a walking distance and it means walking is the best way to explore the town.

In general, a historical center of Prague consists of 4 different parts so to have an overall feeling of the city these four parts need to be included in your tour. As already mentioned, the river separates the city half and two historical sections are to be found on the right bank of the river and two on the left bank of the river. 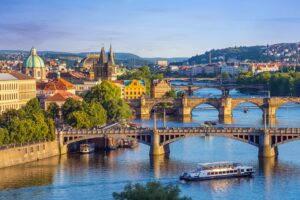 The first of these is the Old Town which is a medieval settlement originally separated from the outside by a wall and a circular moat on one side, while the Vltava served as a natural protection on the other side.

A number of sights are to be found in the Old Town area. Among the most notable we can find the former Jewish Town (Josefov) located in the northwest corner of Old Town heading towards the Vltava and the Old Town Square and Astronomical Clock.

The Old Town is surrounded by the New Town of Prague. Founded as early as 1348 it still bears the name New Town as at the time of its foundation it was the youngest of the other four parts. Among the most famous landmarks belong Wenceslas Square, which was originally built as a horsemarket and now functions as a center of commerce and tourism. 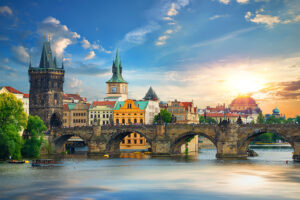 The National museum, Municipal building and the Novoměstská radnice or New Town Hall, site of the first of the three defenestrations of Prague, are some of the others.

On the left bank of the river Vltava connected by the Charles Bridge is the Lesser Town of Prague (Czech: Malá Strana). In the 16th century many palaces of nobility and fine bulidings were built there.

Let us mention a few: The most extensive building of the Baroque Era on Malá Strana is the Wallenstein Palace. The finest one and the most prominent church is the St. Nicholas Church. Another famous sight and a pilgrim place is the famous statue of the Holy Infant Jesus of Prague is in the Church of Our Lady Victorious. Kampa Island and the Petřín lookout tower are also located in Malá Strana.

The last of the four is the Hradcany, so-called the Castle District, is the district of the city of Prague, Czech Republic surrounding Prague Castle. St Vitus Cathedral located in the castle area is the highlight and a masterpies of gothic architecture.

The centre of the town has a medieval layout with squares in the middle and streets pointing towards the squares. It is a good thing to have a map with you and they are provided free either in a reception of your hotel or tourist information around the centre.

Town is very safe and you do not have to worry walking around even in the evening. The only unpleasant experience can be a pickpocketing (like in all turist places) and that is a reason why taking care of your belonging is needed.

Berlin (/bɜːrˈlɪn/ bur-LIN, German: [bɛʁˈliːn] (listen)) is the capital and largest city of Germany by both area and population. Its 3.7 million inhabitants make it the European Union‘s most populous city, according to population within city limits.[2] One of Germany’s sixteen constituent states, Berlin is surrounded by the State of Brandenburg and contiguous with Potsdam, Brandenburg’s capital. Berlin’s urban area, which has a population of around 4.5 million, is the second most populous urban area in Germany after the Ruhr.

The Berlin-Brandenburg capital region has around 6.2 million inhabitants and is Germany’s third-largest metropolitan region after the Rhine-Ruhr and Rhine-Main regions. There was an unsuccessful attempt to unify both states in 1996, and despite remaining separate, the two states cooperate on many matters to this day.

Berlin straddles the banks of the Spree, which flows into the Havel (a tributary of the Elbe) in the western borough of Spandau.

Among the city’s main topographical features are the many lakes in the western and southeastern boroughs formed by the Spree, Havel and Dahme, the largest of which is Lake Müggelsee. Due to its location in the European Plain, Berlin is influenced by a temperate seasonal climate. About one-third of the city’s area is composed of forests, parks, gardens, rivers, canals and lakes. The city lies in the Central German dialect area, the Berlin dialect being a variant of the Lusatian-New Marchian dialects. 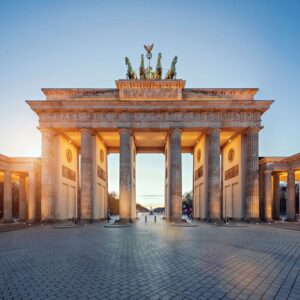 First documented in the 13th century and at the crossing of two important historic trade routes, Berlin became the capital of the Margraviate of Brandenburg (1417–1701), the Kingdom of Prussia (1701–1918), the German Empire (1871–1918), the Weimar Republic (1919–1933), and Nazi Germany (1933–1945). Berlin in the 1920s was the third-largest municipality in the world. After World War II and its subsequent occupation by the victorious countries, the city was divided; West Berlin became a de facto exclave of West Germany, surrounded by the Berlin Wall (from August 1961 to November 1989) and East German territory. East Berlin was declared capital of East Germany, while Bonn became the West German capital. Following German reunification in 1990, Berlin once again became the capital of all of Germany.

Berlin is a world city of culture, politics, media and science. Its economy is based on high-tech firms and the service sector, encompassing a diverse range of creative industries, research facilities, media corporations and convention venues. Berlin serves as a continental hub for air and rail traffic and has a highly complex public transportation network. The metropolis is a popular tourist destination. Significant industries also include IT, pharmaceuticals, biomedical engineering, clean tech, biotechnology, construction and electronics. 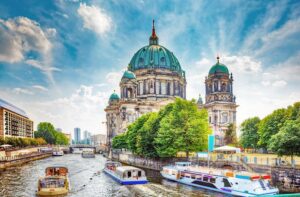 Berlin is home to world-renowned universities such as the Humboldt University, the Technical University, the Free University, the University of the Arts, ESMT Berlin, the Hertie School, and Bard College Berlin. Its Zoological Garden is the most visited zoo in Europe and one of the most popular worldwide. With Babelsberg being the world’s first large-scale movie studio complex, Berlin is an increasingly popular location for international film productions. The city is well known for its festivals, diverse architecture, nightlife, contemporary arts and a very high quality of living. Since the 2000s Berlin has seen the emergence of a cosmopolitan entrepreneurial scene.