Our Cambodian fish amok recipe is traditional – an authentic steamed fish curry made to a classic recipe from an older generation of cooks who believe that if it’s not properly steamed, it’s not amok trei (steamed fish curry).  ‘Amok’ means to steam in banana leaves in Khmer and it is thought that this refined dish is a Royal Khmer specialty dating back to the Khmer Empire.

This classic Cambodian fish amok recipe for a traditional steamed fish curry is based on the recipe of a respected family of elderly cooks whose mothers, grandmothers and great grandmothers made the dish during a time when Cambodian women thought nothing of spending a full day preparing a family feast.

Our Cambodian fish amok recipe isn’t a recipe for the watery fish amok style curry or sloppy fish amok you might have eaten in a Siem Reap tourist restaurant, which can be made in minutes in a wok. To make this authentic steamed fish curry from scratch, including pounding your own Khmer yellow kroeung (a herb and spice paste), you will need to allow at least a couple of hours. 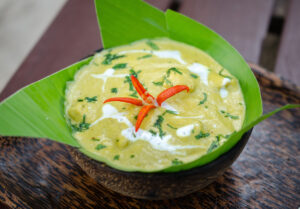 If you cook our Cambodian fish amok recipe and you enjoy it, please consider supporting our original epic Cambodian Culinary History and Cookbook on the Patreon platform, which you can do by making a small monthly pledge, starting from as little as US$2 a month, or by making a one-off donation.

We have been researching Cambodian cuisine and its culinary history since 2013, interviewing old cooks and digging deep into archaeological and historical archives, and this recipe post, which contains original research, was a result of one of our very first in-depth interviews and a couple days observing old cooks. When published the book will hopefully change the way the world thinks about Cambodian cuisine.

Cambodian cuisine must be Southeast Asia’s most under-appreciated and most misunderstood and one of its specialties, fish amok or amok trei (also spelt amok trey) in Khmer, must be one of its most confounding dishes of all, to untrained eyes appearing to be served in an array of forms, shapes and colours.

A traditional steamed fish curry – ‘amok’ refers to the process of steaming in banana leaves – amok trei or fish amok should have a texture that has been described as a mousse, mousseline, soufflé, and custard. We’ve also seen food writers call it a pâté and terrine. It’s most certainly in the realm of the former, but it in no way resembles the latter. 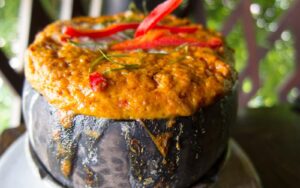 Most food-loving travellers to Cambodia fall in love with fish amok. It’s incredibly delicious and very moreish – it’s one of my favourite dishes. It’s also adorable when presented in a banana leaf basket or coconut shell – as Chef Kethana at Sugar Palm restaurant, who undoubtably makes Cambodia’s finest fish amok, does – with a drizzle of coconut cream and finely sliced kaffir lime leaves and chilli on top.

Fish amok is beloved by Cambodians. So much so that it’s often called Cambodia’s national dish – despite the fact that Cambodians probably don’t eat it often themselves. This is a special occasion dish. When it’s made in the authentic old style it’s rich and luxuriant and seems to incite feelings of nostalgia for an old way of life – even if it’s a life that many have never known.

Older cooks believe that amok trei is a Royal Khmer dish dating to the Khmer Empire. And in a country with a long history of oral storytelling, where family recipes are rarely written down, but daughters learn to cook from their mothers and grandmothers, who are we to argue with Cambodia’s culinary tradition. 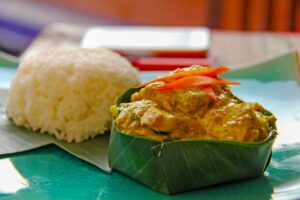 There are also signs of its royal provenance in the refined nature of the dish, its complexity of flavour, and the time-consuming preparation when it’s made correctly – which requires pounding the kroeung (herb/spice paste), the base for the dish, and steaming it for 20-30 minutes until it’s firm to touch.

Despite its regal origins, amok trei is a dish that you’ll see sold in banana baskets on trays in markets and on the street. Although, I’ve never been as impressed by the take-away version. The fast food variety of amok trei is more rustic, like Thailand’s hor mok pla (also spelt haw mok pla) and the Nyonya specialty otak otak, which is essentially street food, typically spotted in markets.

Fish amok is sometimes compared to the Indonesian otak otak, which is actually more similar to the Cambodian street food snack called song vac or sang vak (also written as sangvak – ‘ang’ is pronounced as ‘ong’ in Khmer), a ground fish paste, wrapped in a banana leaf parcel and grilled over charcoal.

Our Cambodian fish amok recipe comes from the matriarchs of an old Cambodian family – several little old ladies who are the daughters of a long-gone generation of cooks, including a cook to a king. These women take their food seriously, thinking nothing of recruiting young female relatives and neighbours for a full day of preparation for a family meal. Our old ladies’ amok trei recipe can take several hours if followed closely.

For this older generation, their way of cooking Cambodian food – or rather, Khmer food (there is a difference between the two) – is the only way to cook what they believe to be the authentic food of Cambodia, which for them was at its best in the pre-Khmer Rouge era. 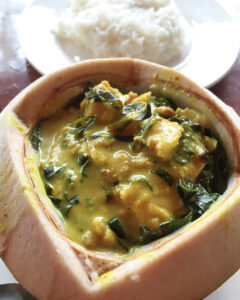 When we informed our old lady cooks that it’s possible to see fish amok in Siem Reap restaurants that hasn’t been steamed and that it’s served as watery as a soup or at best as a curry, they were aghast. When we revealed that it’s also offered with a choice of chicken, beef, pork, vegetarian, and tofu instead of fish, they were even more horrified. I love how Terence tells this story here in Ruining Amok, the National Dish of Cambodia.

It should be noted, however, that while this is generally just a short-cut to feed tired, impatient and hungry tourists, Cambodians are also known to make amok trei in a curry form, particularly poorer, hard-working Cambodians with less time on their hands. As Terence puts it in that same story on the link above, who wants to watch a dish steam for 30 minutes after working in the rice fields all day?

I spotted one food blogger write that some Cambodians don’t steam fish amok because they don’t have “steaming equipment”. While the traditional basket steamers aren’t used for fish amok (they’re used for sticky rice), they’ve probably been used for over a thousand years and can be hand-woven in a day. Not a lot of ‘equipment’ is needed to steam something here in this part of the world.

Even the poorest Cambodian home has a clay brazier in their rustic outdoor kitchen, which is often a bamboo hut or low wooden prep table in the breezy space under the house. The brazier is another piece of ‘equipment’ that’s been used for a few thousand years. It features in the bas reliefs on the walls at the Angkor temples.

Every home will have a wok, which can be used with a bamboo steamer, or they’ll have a large steaming pot. There will also be a very large mortar and pestle in the Cambodian kitchen.

We’ve established that steaming is essential if you’re going to make this Cambodian fish amok recipe the old way, but there are a few time-saving measures for busy home-cooks and we need to tell you about substitutes. While we believe that the Khmer yellow kroeung tastes better when it’s made in a mortar and pestle, and I personally love few things more than hearing the sound and smelling the fragrance of a fresh herb and spice paste being made, you can save a lot of time by using a blender instead obviously.

For this Cambodian fish amok recipe our little old lady cooks prefer goby fish, snakehead fish or catfish – all freshwater fish from the Tonle Sap or Great Lake. Most cookbooks written in the West suggest a firm white fish such as cod or snapper. In cooking classes in Siem Reap,

cooking instructors tell participants they can use anything from barramundi to salmon. David Thompson in Thai Food suggests whiting, blue eyed cod or perch for Thailand’s haw mok, which is a descendant of amok trei. Chef Kethana at Sugar Palm also makes a heavenly prawn amok. 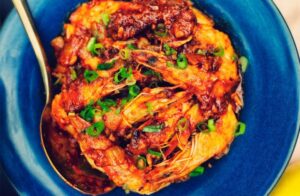 Our little old ladies have one of the young assistants massage the kroeung into the fish fillets for up to an hour and let it rest before slicing it. For more intense flavour, after combining the kroeung and fish you could skip the massage and leave it to marinate in the fridge for a while.

Some Cambodian cooks will use their beloved prahok (fermented fish) instead of shrimp paste (kapi in Khmer) for a more authentic flavour. We’ve also seen young cooking instructors add

“seasoning” (i.e. MSG) and/or Knorr’s chicken powder stock cubes, which would have their grandmothers rolling in their graves if they weren’t Buddhists who’d been cremated.

Recipes written for a Western readership suggest substituting the noni leaf with everything from kale to spinach. Chef Joannès Rivière of Siem Reap’s Cuisine Wat Damnak restaurant recommends Swiss chard in A Culinary Journey in Cambodia (see link at the end of this post), a cookbook produced by Sala Bai Hotel School. Although note that this is a recipe for a fish amok ‘curry’ and is not steamed. 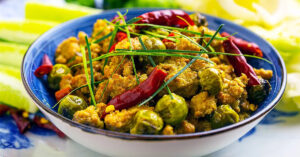 One thing we often get asked about is the colour that an authentic Cambodian fish amok should be. If you’ve travelled around Cambodia, you’ll notice that fish amok can range from yellow to yellow-green to an orange-brown colour. Chef I Kethana’s is more of an orange shade due to a red tinge from to the chilli, while the amok trei we see in markets, especially in villages, is often yellow or yellow-green.

The yellow-green fish amok is made with either the yellow kroeung paste or kroeung samlor m’chou in Khmer (made with the base of lemongrass stalks, galangal, kaffir lime zest, turmeric, garlic, shallots) or the green kroeung paste or kroeung prahoeur (which also uses the green leafy part of the lemongrass, and has kaffir lime zest, turmeric, garlic, and shallots, the addition of finger-root (also called Chinese keys), but no galangal).

The orange-red fish amok uses the same yellow kroeung paste as a base, but has the addition of red chilli. Note that fish amok it is not normally made with red kroeung or kroeung samlar cari in Khmer, which has the yellow kroeung base of lemongrass, galangal, kaffir lime zest, turmeric, garlic, shallots, plus the addition of coriander seeds, cumin seeds and dried red chilli, and shrimp paste or prahok. These additional spices would make the amok trei very intense and it’s already rich enough.

If you happen to have a banana tree in your backyard, pull off a banana leaf or two. You’ll need to clean and soften your banana leaves in warm water and then pat dry. Use an upturned round plate or cake tin to trace a roughly 20-25cm in diametre circle onto a leaf and cut it out with scissors.

The size will vary depending on how large you wish them to be, whether you’re serving your fish amok as a main-size dish to be eaten family style for all guests to help themselves (when you’ll want to create a large banana leaf bowl) or individual appetisers (when you’ll need smaller bowls). We made mini fish amoks for our contemporary Cambodian feast. The small sizes are not only cute, they steam quickly. You’ll need to experiment.

Lay the cut-out flat and create a square bottom by raising one side at a time, folding each corner around onto the next side. Secure each side with half a wooden toothpick. We’ve seen young chefs staple the leaves but this doesn’t look pretty. Trim the tops so they’re even.