The history of Cambodia, a country in mainland Southeast Asia, can be traced back to Indian civilization. [1][2] Detailed records of a political structure on the territory of what is now Cambodia first appear in Chinese annals in reference to Funan, a polity that encompassed the southernmost part of the Indochinese peninsula during the 1st to 6th centuries. Centered at the lower Mekong,[3] Funan is noted as the oldest regional Hindu culture, which suggests prolonged socio-economic interaction with maritime trading partners of the Indosphere in the west.[4] By the 6th century a civilization, called Chenla or Zhenla in Chinese annals, firmly replaced Funan, as it controlled larger, more undulating areas of Indochina and maintained more than a singular centre of power.[5][6] 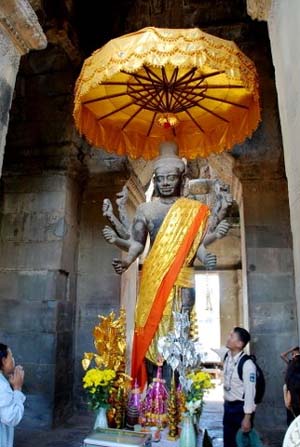 The Khmer Empire was established by the early 9th century. Sources refer here to a mythical initiation and consecration ceremony to claim political legitimacy by founder Jayavarman II at Mount Kulen (Mount Mahendra) in 802 CE.[7] A succession of powerful sovereigns, continuing the Hindu devaraja cult tradition, reigned over the classical era of Khmer civilization until the 11th century. A new dynasty of provincial origin introduced Buddhism, which according to some scholars resulted in royal religious discontinuities and general decline.[8] The royal chronology ends in the 14th century. Great achievements in administration, agriculture, architecture, hydrology, logistics, urban planning and the arts are testimony to a creative and progressive civilisation – in its complexity a cornerstone of Southeast Asian cultural legacy.[9]

The decline continued through a transitional period of approximately 100 years followed by the Middle Period of Cambodian history, also called the Post-Angkor Period, beginning in the mid 15th century. Although the Hindu cults had by then been all but replaced, the monument sites at the old capital remained an important spiritual centre.[10] Yet since the mid 15th century the core population steadily moved to the east and – with brief exceptions – settled at the confluence of the Mekong and Tonle Sap rivers at Chaktomuk, Longvek and Oudong.[11][12]

Maritime trade was the basis for a very prosperous 16th century. But, as a result foreigners – Muslim Malays and Cham, Christian European adventurers and missionaries – increasingly disturbed and influenced government affairs. Ambiguous fortunes, a robust economy on the one hand and a disturbed culture and compromised royalty on the other were constant features of the Longvek era.[13][14] 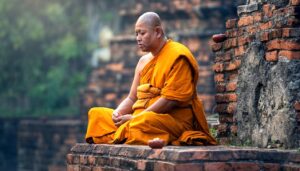 By the 15th century, the Khmers’ traditional neighbours, the Mon people in the west and the Cham people in the east had gradually been pushed aside or replaced by the resilient Siamese/Thai and Annamese/Vietnamese, respectively.[15] These powers had perceived, understood and increasingly followed the imperative of controlling the lower Mekong basin as the key to control all Indochina. A weak Khmer kingdom only encouraged the strategists in Ayutthaya (later in Bangkok) and in Huế. Attacks on and conquests of Khmer royal residences left sovereigns without a ceremonial and legitimate power base.[16][17] Interference in succession and marriage policies added to the decay of royal prestige. Oudong was established in 1601 as the last royal residence of the Middle Period.[18]

The 19th-century arrival of then technologically more advanced and ambitious European colonial powers with concrete policies of global control put an end to regional feuds and as Siam/Thailand, although humiliated and on the retreat, escaped colonisation as a buffer state, Vietnam was to be the focal point of French colonial ambition.[19] [20] Cambodia, although largely neglected,[21] had entered the Indochinese Union as a perceived entity and was capable to carry and reclaim its identity and integrity into modernity.[22][23]

After 80 years of colonial hibernation, the brief episode of Japanese occupation during World War II, that coincided with the investiture of king Sihanouk was the opening act[24] for the irreversible process towards re-emancipation and modern Cambodian history. The Kingdom of Cambodia (1953–70), independent since 1953, struggled to remain neutral in a world shaped by polarisation of the nuclear powers USA and Soviet Union.[25] As the Indochinese war escalates, Cambodia becomes increasingly involved,[26] the Khmer Republic is one of the results in 1970, another is civil war. 1975, abandoned and in the hands of the Khmer Rouge, Cambodia endures its darkest hour – Democratic Kampuchea[15] and its long aftermath of Vietnamese occupation, the People’s Republic of Kampuchea and the UN Mandate towards Modern Cambodia since 1993.[27]