The process of making khao poon could have been brought by the Lao ancestors as they migrated into the Greater Mekong Subregion from Southern China. It is also likey that the khao poon noodles was introduced to Laos by Chinese merchants because Luang Prabang and Vientiane was part of an ancient trade route with China. Laotians have been making khao poon noodles soup for sale at the market and for their own consumption long before the French arrived in Laos in the 1800s. 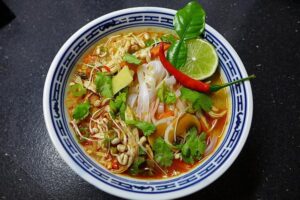 Coconut milk curry was probably introduced to Laos during the indianization of the Lao Lan Xang kingdom in the fourteen century by the Khmer, Indian merchants, or even as early as the seventh century by Buddhist monks. Several centuries later Lan Xang would signed a contract with the Dutch East Indian Company[7] and trade directly with the world through the ports of Cambodia.

Khao poon is often described as Lao royal vermicelli coconut curry soup due to its bright red and golden colors representing the colors of the Lao royal family.

During the 1950s, André-Yvette Gouineau, the famous French resistance fighter and France’s national hero, was a professor at lychee de Vientiane, Laos.  While in the Laos, Gouineau collected several traditional Lao recipes including khao poon. Gouineau described khao poon as a “dish of vermicelli served with raw vegetables and a special sauce; it is very nourishing.”

Gouineau’s recipe echoed Phia Sing’s recipe for khao poon nam phrik. The two recipes consisted of using already cooked pork and fish combined and mashed in a pestle and mortar with spices and herbs before adding the mixture to freshly squeezed coconut milk, padaek, and broth. The dish is served with finely sliced banana flower, bean sprouts and mint. The final plating of khao poon was meticulously described in the recipe as “filling the bottom of the soup bowl with vermicelli, add several pitches of the various raw vegetables according to their taste and preferences and bathe the whole with a generous helping of the creamy sauce.