Phu Quoc, known as “pearl island”, has become the first island city in Vietnam with full autonomy of a municipal-level administrative unit, creating a premise for the island to become a major economic, tourist and service hub in the region and the world. This also shows Vietnamʻs strategy for developing its marine economy while maintaining security and defense on its islands and sea.

From my airplane window, Phu Quoc appeared as a green sail full of wind in the middle of the sea. The middle-aged man sitting next to me on the plane made an interesting comparison that Phu Quoc looked like a miniature South America.

From sunny and windy Phu Quoc airport, I took a taxi to Sea Star Resort, a small coastal resort in the center of the new-born city in Duong Dong ward. The taxi ran along Tran Hung Dao, a bustling road on the western coast of the island, giving me a mixed feeling of excitement and surprise, which replaced my earlier imagination of a calm and small island. 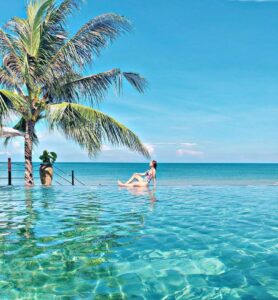 Life in Phu Quoc is imbued with the culture of islanders with fishing villages, fishing ports and traditional craft villages making pearl, fish source and growing pepper. Yet, the local cuisine is perhaps the biggest attraction of Phu Quoc where fresh seafood are made with special local flavors that can not be found anywhere else.

That’s why, Phu Quoc has been praised as an appealing destination by major world newspapers and magazines. In 2020, Phu Quoc ranked 7th among top 15 emerging destinations in the world listed by TripAdvisior, the world’s largest travel site. In 2019, US-based television network CNN placed Phu Quoc among 17 best places in Asia. In 2018, CNN also listed Phu Quoc as one of the top five Asia-Pacific destinations to visit in autumn. Venus Wong, The Telegraph’s assistant content editor, called Phu Quoc “the paradise island” with “unbelievable sunsets” on Dai (Long) beach. She was also impressed by a local dish-Ham Ninh crab, which “was so fresh that it could almost stand up and scuttle away.”

According to the Administration of Tourism, tourist arrivals to Phu Quoc have constantly grown by 20-30% annually over the past few years. In 2019, before the outbreak of COVID-19, Phu Quoc received nearly 6 million visitors, including nearly 1 million foreigners.

As a result, the island has seen a boom in tourism investment in recent years. A host of luxury resorts and amusement complexes have been built, creating a new look for the island. They include Vinpearl Land, Sun World Hon Thom Nature Park, Vinpearl Safari, and Phu Quoc Casino. 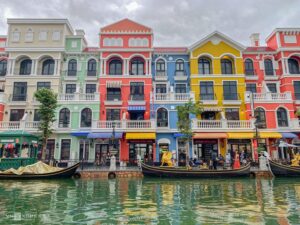 In December 2020, the National Assembly passed a resolution to set up Phu Quoc city in Kien Giang province, which was a turning point for the “pearl island” to develop into a tourist heaven, just like Phuket, Bali, or even the Maldives or Hawaii. It is also set to become a regional and international economic and service center.

Speaking at the ceremony on the establishment of Phu Quoc city, Deputy Prime Minister Truong Hoa Binh stressed that the development planning for Phu Quoc must have a vision of at least 50 years to meet long-term development requirements for the city to become a national, regional and international tourist and trade center. The island is set to develop based on four major pillars: entertainment industry, convalescence tourism, finance and banking services and marine economy.  The deputy prime minister asked the city to propose special mechanisms and policy for Phu Quoc, including an administration model of an island, and investment incentives to attract financially viable investors. 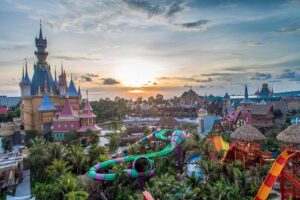 Phu Quoc has already made major investment to meet its rising demand for economic and tourist development, including the new construction of Phu Quoc international airport which can accommodate almost all types of aircraft flying directly from Asia and Europe,  and an international sea port which can receive cruise ships with a capacity of 5,000-6,000 passengers. Another project is the 57km-long undersea cable line, the longest of its kind in Southeast Asia, to supply power for Phu Quoc, lighting up the island’s socio-economic development and investment.

The island has attracted invesment from leading groups such as Vingroup, Sungroup, BIMgroup, CEOgroup, MIKgroup and Milltol. Phu Quoc has to date had 372 projects with a total registered capital of around 16.5 billion US dollars, including over 30 foreign-invested projects worth more than 300 million US dollars. The island city is home to luxury resorts of international brands such as Marriott, Intercontinental, Hyatt, Movenpick and Novotel. 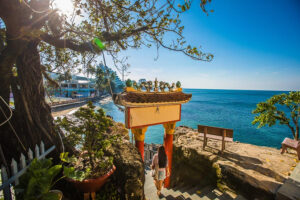 According to Huynh Quang Hung, chairman of the People’s Committee of Phu Quoc city, investors in Phu Quoc are enjoying the most preferential investment mechanisms and policy as allowed by the Government. Hung said the municipal authority aimed to place Phu Quoc on the map of popular island cities in the world, and thus is working out more incentives on land tax, land use, immigration to attract investors.

Phu Quoc has an area of nearly 590 km2, almost equal to the area of Singapore. Phu Quoc borders on Ha Tien in Kien Luong district; the Gulf of Thailand and Cambodia. It has two wards and seven communes with a population of nearly 179,500. In the sea area of Phu Quoc, apart from the main island, there are 32 other islands, including Thom, Dam, Xuong, Mong Tay and May Rut islets.