Savannakhet (commonly abbreviated to ‘Savan’) and more officially known as ‘Kaysone Phomvihane’ (district name), is the capital of Savannakhet Province in Southern Laos and is located alongside the Mekong River. With an estimated population of 120,000 it is the second largest city of Laos. The city is an important hub between West (Mukdahan, Thailand) and East (Vietnam), and between North (Vientiane) and South (Pakse).

Travelers visiting Savannakhet are often surprised by its old French colonial architecture and the friendly, sleepy atmosphere of the town which conserves many aspects of Lao traditional culture. The small but blossoming tourist sector offers various eco-trekking programs to the outskirts of town and to preserved forests and other places of interest in neighbouring districts (such as Khammouane). The welcoming and generous character of the local people makes you easily feel part of the community. Although recently a large casino was established, Savannakhet has no touristic night-life scene. Over the last two decades dinosaurs have become a theme of Savannakhet, with a Dinosaur Museum and decorations in the streets.

Savannakhet probably was founded in the 17th century by forty families who immigrated from Phonsim village around twenty km to the east. It is said that the settlement at the Mekong riverside was called Tahae village, and researchers assume that Buddhist Temple ‘Vat Xaiyaphoum’ is an important remainder of that era.

France expanded Indochina by obtaining the eastern bank of the Mekong after a border dispute in 1893. Initially the French used the Mekong river as the main street of transport. Soon afterwards a network of water transportation, post & telecommunication facilities and a railway were completed. A road, connecting Savannakhet with Quang Tri (Vietnam), was also established. In the 1920s and 1930s Vietnamese and Chinese people started to settle in Savannakhet. Nowadays, the Chinese and Vietnamese still live in the same parts of the city, while other parts are still redolent of the French administration that was located at the Southern part of town. 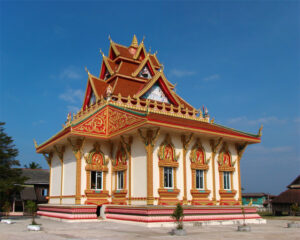 Recently an important chapter was added to the history of Savannakhet, with the opening of the 1600-metre Lao-Thai Friendship Bridge II in 2007. The bridge connects Savannakhet (and Vietnam) to Mukdahan (Thailand). Foreign investors and NGOs are considered to be crucial for the development of the town and province.

Most foreign visitors to Savannakhet these days are visiting with the sole intention of visiting the Thai embassy to obtain a visa. There is very little to see or do in Savannakhet for foreigners, and if you don’t have a pressing need to visit you would do well to avoid stopping there. Most goods sold at the markets are of poor quality, and in general restaurants are not even up to Thai standards. However, Laos people are very friendly and welcoming, and Savannakhet as of 2019 has a few hotels and restaurants which are decent quality.

If travelling from Mukdahan in Thailand, you will notice that Savannakhet appears, more old-fashioned, dirtier and more third-world. They still have not erected traffic lights at the intersections, so both driving and crossing the road on foot can be very dangerous.