Chinese spring rolls, chūn juǎn, are made with thin wheat wrappers and are usually filled with cabbage and often bean sprouts or bamboo shoots and sometimes pork. You’ll often use oyster sauce as part of the seasoning, though the fillings and seasonings vary regionally as well. You fry them so they are crisp on the outside. 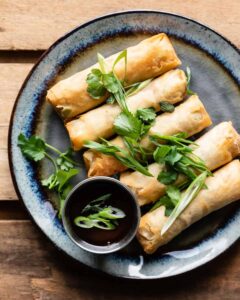 Soft Vietnamese spring rolls, goi cuon, have rice wrappers that are softened in water rather than cooked. Fillings can vary, but the more traditional fillings include rice noodles, lettuce and herbs, shrimp and/or pork.

You might also know them as summer rolls, and these days you’ll also find less traditional fillings like duck and mixed vegetable. In all cases, they are served chilled.

These crispy Vietnamese spring rolls, chả giò or nem rán (N Vietnam), are traditionally also made with rice paper wrappers but these days thin wheat wrappers are becoming more common. The wheat wrappers tend to crisp up better and have less issues with them cracking and the filling escaping. You also don’t need to pre-soak them.

The filling is typically broken up mung bean vermicelli noodles and mushrooms, (often wood ear) along with pork and, sometimes, shrimp, though this can vary regionally. You often have other vegetables in there as well.

They’re fried to be nice and crisp, but you can bake if you prefer (it’s less traditional and they are typically less crisp). You might also see these called Vietnamese egg rolls.

Tips For Making These

These are not that difficult to make, but do have a couple steps and it’s worth keeping a couple things in mind. First, get all of your filling prepared before you open your spring roll wrappers to save the wrappers drying out. Try to chop the mushrooms pretty small to make them easier to eat.

Don’t overfill the rolls – they take less than you might think! Keep them as even as possible to help them all cook at the same speed. If possible, roll relatively quickly so they don’t dry out. Use the description and photos above to help in how to fold them.

It can be tempting to try to limit oil, but it actually just means they are more likely to burn or not cook evenly rather than take on any less. So make sure you have a layer in your wok or skillet at all times.

How To Serve Cah Gio

The most typical way to eat these is wrapped in a lettuce leaf, often with a few herbs in there as well like mint or cilantro, and then dipped in nuoc cham (correctly written as nước chấm).

Nước chấm is in some ways a range of sauces served with many Vietnamese dishes, like bun cha Hanoi and with grilled meats. The ingredients vary, depending what its paired with, but it’s typically a sweet, sour, salty and sometimes spicy mix. Fish sauce is in most, with lime and sugar also in many versions.

These rolls are often more of a snack food that you might have between meals. Being finger food, they are perfect to pick up at a street stall. They are also sometimes a component of other dishes such as bun thit nuong (a dish of noodles, pork and shrimp) and salads.

A common part of Vietnamese meals is having a range of dishes that are shared between the table. Sometimes this more a main with some sides, but can extend to a much broader range of dishes for feasts. Chả giò are a dish you’ll pretty much always find as part of the feast for Tết Nguyên Đán, the Vietnamese Lunar New Year.

Whether as part of a feast, as an appetizer or snack, there’s no doubt these Vietnamese fried spring rolls are a delicious savory treat. The fillings are relatively simple but a tasty mix, and the nuoc cham dipping sauce is the perfect pairing. So get rolling, and try them soon.