The long dress or ao dai is a tight-fitting silk tunic worn over pantaloons. Although there has never been an official document designating the “ao dai” as the national dress of Vietnamese women, the tunic is worn by Vietnamese women for any important or formal occasion such as a national holiday or a traditional festival.  The beautiful tunic has always been a source of pride for Vietnamese.

Images of ao dai are found on Dong Son bronze drums and other artifacts dating back thousands of years. In the early 20th century, most urban Vietnamese women wore tunics made with five panels called “áo ngũ thân”, the five panels, reflecting the five elements of oriental cosmology. The áo ngũ thân had a loose fit and sometimes had wide sleeves. 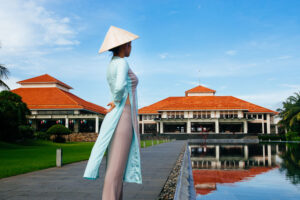 The áo ngũ thân had two flaps sewn together in the back, two flaps sewn together in the front, and a “baby flap” hidden underneath the main front flap. The gown appeared to have two-flaps with slits on both sides, features preserved in the later ao dai. Compared to a modern ao dai, the front and back flaps were much broader and the fit looser. It had a high collar and was buttoned in the same fashion as a modern ao dai. The 4 main flaps were said to represent the wearer’s parents and in law while the baby flap represents herself. Artist Doan Thi Tinh says the traditional long dress has made a strong comeback since 1975. She told us: “I really like the harmonization of colors in Vietnamese women’s clothes, especially the ao dai. From 1950 to 1975, the tunic saw no significant changes in its design. But since 1975, tailors have broken many old rules in making this kind of tunic.

I remember that after 1980 we began to have ao dai fashion shows which reflected our pride in the tunic. The dress is now popular in many international fashion shows.” 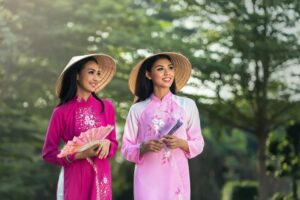 Different from the Japanese kimono or the Korean hanbok, the Vietnamese ao dai is both traditional and modern.  The ao dai is now standard for weddings, for celebrating Tết, and for other formal occasions. A plain white ao dai is a common high school school uniform. Companies often require their female staff to wear uniforms that include the ao dai, so flight attendants, receptionists, restaurant staff, and hotel workers in Vietnam may be seen wearing it. The most popular style of ao dai fits tightly around the wearer’s upper torso, emphasizing her bust and curves. Although the dress covers the entire body, it is thought by some to be provocative, especially when it is made of thin fabric. Vice Chairman of the Asian Folk Culture Association, Professor Ngo Duc Thinh, said: “Although the tunic covers the entire body, it still shows the wearer’s shapeliness. The most typical beauty of Vietnamese women is honored in the long dress. It can be said that Vietnamese women are uniquely beautiful in ao dai.”

The dress must be individually fitted and usually requires several weeks for a tailor to complete, so there is no mass production for this kind of dress. Culture researcher Trinh Bach told us: “Many people mistakenly think the Vietnamese long dress originated from the Chinese cheongsam. For thousands of years now, the “ao dai” of Vietnam has been buttoned on the left while the cheongsam of China is buttoned on the right.”
The ao dai has inspired countless musicians and poets and has appeared in numerous songs and poems about the beauty of Vietnamese women. Vietnam’s traditional dress, now a familiar sight at international cultural events, has gained admirers around the world. The tunic was selected as compulsory clothing for the Miss Earth beauty contest held in Nha Trang in 2007.