Water puppetry is unique to Vietnam. Featuring stories from everyday life and famous legends, it features fire-breathing dragons, farmers, frogs, old men, gods, goddesses, and fish. Performances are usually accompanied by music and have little dialogues. The stories, which are well-known to Vietnamese, are conveyed through actions. According to one story, water puppetry was developed in the 11th century in the Red River Delta by puppeteers who decided to carry on even though there was a flood. More of a folk art than a court art, it has a long history of being performed in ponds and rice paddies during lulls in the agriculture cycle. Water puppetry nearly died during the war years but has been revived in recent years and is enjoyed by Vietnamese and tourists. The Vietnamese government has asked that it be declared part of the world’s cultural heritage by UNESCO. 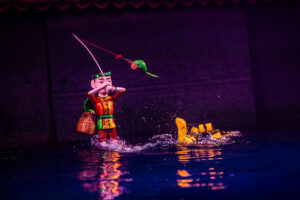 Dr. Jukka O. Miettinen of the Theater Academy Helsinki wrote: “Vietnam also has its own tradition of puppet theater, mua roi nuroc (puppets that dance on water). It is an old and rare North Vietnamese form of puppet theater, and it has actively been revived since the 1980s. In a number of small villages near Hanoi water puppet theater is still performed at certain festivities, as it has been in times past. [Source: Dr. Jukka O. Miettinen,Asian Traditional Theater and Dance website, Theater Academy Helsinki |~|]

The pond and lakes of the northern plains, where crowds gathered during festival and galas, become the lively stages for the water puppet shows. At a water puppet show, the audience watches boat races, buffalo fights, fox hunts and other rustic scenes amidst the beating of drums and gongs. The characters plough, plant rice seedlings, fish in a pond with a rod and line, scoop water with a bamboo basket hung from a tripod, etc. The show is interspersed with such items as a Dance by the Four Mythical Animals: Dragon, Unicorn, Tortoise, and Phoenix and Dance by the Eight Fairies, in which supernatural beings enjoy festivities alongside people of this world.

Vietnamese water puppets are made of wood and coated with lacquer and waterproof paint. Each puppet is handmade, has its own posture and expresses a certain character. The most outstanding puppet, known as the chu teu, has a round face and a humorous and optimistic smile. Some of the puppets are quite large—60 centimeters tall and weighing 13.5 kilograms—and are manipulated by three puppeteers.

The puppets are manipulated with rods hidden under the water. Complicated mechanisms make it possible to move the puppets’ limbs and even to make a puppet smoke a cigarette. The configuration of the poles and wires under the water is a secret, and spectators are not allowed to watch from behind the screen. There are many contributing factors to the art of water puppetry, including such handicrafts as wood sculpture and lacquer work. The factors all work together to bring out charming glimpses of the Vietnamese psyche, as well as typical landscapes of Vietnam.

There are currently about a dozen water puppet troops, performing mostly in villages in the Red River Delta. They typically know a repertoire of 40 or 50 vignettes. The groups that are the most successful are the one who perform before tourist in Hanoi and Saigon. Most of the puppeteers are farmers who work hard to perfect their technique but generally perform for free. One of them told AP, “Puppet shows are not very expensive to produce, so we’ve been able to revive them. But it depends on the contribution of the puppeteer, who usually don’t receive any salaries…There’s not much support from the government because it faces many financial difficulties.

Khanh Van wrote in the Viet Nam News, “Vietnamese water puppetry originated from the Song Hong (Red River) Delta of Viet Nam in the tenth century. It began to grow in popularity from the 15th century. At that time, farmers performed the art and used it as a means to relax after the harvesting was done.

The custom is still alive and well in many parts of rural Viet Nam . Water puppetry was created by lively farmers who spent their days in flooded rice fields. They noticed that water was an excellent medium for puppetry, as it concealed the puppeteers’ rod and string mechanisms, and provided exciting effects like waves and splashes. [Source: Khanh Van, Viet Nam News, January 11, 2009 //\]

Dr. Jukka O. Miettinen of the Theater Academy Helsinki wrote: “It was formerly believed that water puppet theater came to Vietnam from China, where early literary references to a similar art form exist. At present, experts believe that the Chinese adopted water puppetry from the Vietnamese, where the tradition is believed to have evolved in the 11th century. In the 1970s, water puppetry performances were organized in only a few villages, but partly because of the interest of the foreign community in Hanoi, a project was launched by Western countries and cultural institutes to document and propagate this unique tradition. Now commercial performances are staged daily in several theaters in Hanoi and Saigon. |~|[Source: Dr. Jukka O. Miettinen,Asian Traditional Theater and Dance website, Theater Academy Helsinki |~|] 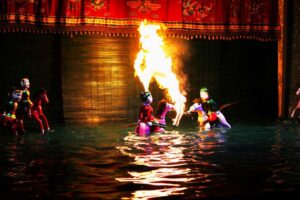 According to Reuters: “The art form is unique to just six provinces clustered in the delta around Hanoi, and no sign of the art has ever emerged in neighboring China, Laos and Cambodia or even central and southern Vietnam, despite similar agrarian environments. This puzzles historian and puppet expert Nguyen Tran Dung. “Agriculture in the north and south is based on the same water rice paddies and other countries around also have rice paddies, but they don’t have water puppets. That’s a big question,” Dung said. Historians say that before Vietnam’s succession of liberation wars from the 1940s to the late 1970s, there were as many as 28 troupes, compared with 13 still active in 2005. [Source: Reuters, September 21, 2005 **]

“Shows were suspended during wartime, when puppeteers like Dau became soldiers, and bombing made it too dangerous to perform. Since communist-run Vietnam adopted an open-door policy of economic renewal in 1987, professionalism has been brought to this ancient folk art. Museum director Huy acknowledged it had also spurred the provincial troupes to improve. Thousands of foreign tourists attend the daily professional shows in Hanoi, and these troupes have toured abroad. In centuries past, people were initiated into a troupe after the new member and other members had cut themselves, drunk the blood and sworn not to reveal trade secrets or they and three future generations would die. Chang Son troupe chief Dau says the secrets are no longer a matter of life and death, but fears that if his village pond is not cleaned up, his beloved puppets may never perform again.”

Rural water puppetry is being threatened somewhat by television and pop music and the necessity to make money but puppeteers don’t think it will die out. One puppeteer told AP, “it originated from the farmers, and when farmers see it, they feel part of the show. So I think it will live forever, like a mirror which reflect the people ‘s daily life.”

Water puppet performances for tourists and urbanites are held in meter-deep-water special theaters with a pool before the audience or at lakes, pond or swimming pools. The puppets are attached to rods, which are manipulated by puppeteers, who stand waist-deep in the water hidden behind a bamboo screen.

The show starts an introduction by the chu teu, the buffoon character, dressed in an odd costume, offering joyful laughter. A small orchestra is accompanied the narrators who recite the story and the necessary lines. The repertoire, varying from village to village, consists of standard scenes, partly dealing with Vietnamese history, classics and, more often, of domestic affairs.

In water puppet shows there is a very effective combination of visual effects provided by fire, water, and the movements of the marionettes. The whole control system of the show is under the surface of the water, concealed from the audience. When fairy figures appear to sing and dance, it is calm and serene; then the water is agitated by stormy waves in scenes of battle, with the participation of fire-spitting dragons. [Source: Vietnamtourism. com, Vietnam National Administration of Tourism ~]

Dr. Jukka O. Miettinen of the Theater Academy Helsinki wrote: “A performance usually begins with a dance of the dragons and a show of fireworks, after which Teu, the stock clown, makes his entrance, being followed by special animal scenes in which horses, frogs, turtles, and mythological creatures are introduced. Ploughing with water buffaloes, fishing scenes, and other everyday activities are also enacted. The most dramatic scenes are those of Vietnamese history, such as famous sea battles. The commercial performances are performed in theater houses in a rubber pond that is some 5 by 5 meters. The performances are accompanied by a traditional North Vietnamese orchestra with singers. The repertory still consists of the short standard scenes. Water puppet troupes regularly tour abroad, making this unique art form known around the world.[Source: Dr. Jukka O. Miettinen,Asian Traditional Theater and Dance website, Theater Academy Helsinki] 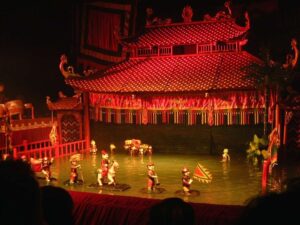 David Thurber of AP wrote: “A grinning tiger splashes through the water, grabs a duck from a helpless farmer and races up a tree six meters away, its prey dangling from its mouth…The audience roars at the antics controlled by puppeteers standing thigh-deep in water behind a bamboo screen. Long underwater poles and ropes transmit the complex motions to the colorful hand-carved puppets—including dancing maidens, smoke-belching dragons and fish that pull lazy fishermen into the deep.”

“The performance—introduced by a country bumpkin named Teu—intersperse vignettes of life in a farming village with legends about Vietnam’s creation, magical turtles and brave kings. In many, humans are outfoxed by nature…The water serves as not only the stage but also a character in the stories, portraying the tranquil ripples of a duck pond as well as the violent waves of an ocean battle.”

In 2005, Reuters reported from Chang Son, “At show time, wooden puppets 25 centimeters to 47 centimeters (10-18 inches) tall emerge from behind a bamboo blind, often in a blaze of colorful flags. The puppets are painted red and black, orange, brown and green. Some scripts carry the audience into a fantasy world of dragons spitting flames, unicorns, dancing phoenixes and fairies. Exploding firecrackers can add to the excitement, filling the air over the watery stage with smoke.

The unseen puppeteers stand barefoot, wearing only their their underwear, in the pond or paddy and send puppet people, elephants, buffalo, snakes and other animals gliding along the water using a system of rods, strings, levers and hinges. [Source: Reuters, September 21, 2005]
These techniques are among the craft’s most closely guarded secrets, passed down through a family’s male line. For the past decade, women too have performed the task in professional arenas.

It takes years of practice to make the puppet’s maneuvering mechanism or to develop skills to move its body parts. The dolls are accompanied by musicians playing drums, flutes and other wind instruments while a narrator tells tales, some up to 90 minutes long, with titles such as “Water buffalo creeps into a pipe”, “A hero fights a tiger”, or “Fishing for Frogs”.

One favorite in the furniture-making village of Chang Son in Ha Tay province about 45 kilometers (28 miles) southwest of Hanoi is “Betel Nut Offering.” Traditionally, offering betel was the way to start a conversation in Vietnam. Village market vendor Phi Thi Hang said she first saw puppets when she was 15. Fifty years later, she still attends shows. Hang admiringly described a puppeteer skillfully maneuvering a puppet to hold up a tray of betel nuts while it floated around the pond. The puppet offered betel to audience members who removed the nuts and left money on the tray.